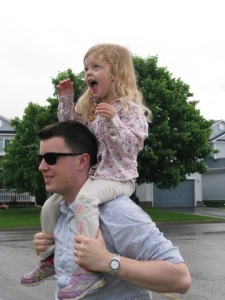 s and her dreams reflect that, but her “dreams” are not what we think of as dreams—winning the lottery, a dream job. Her dreams are just so…realistic.

Example: When she was three, her dream was to see a rainbow. She told us that, repeatedly. One summer evening, we were driving home through a rain shower. As it started to let up, I said it was the perfect time for a rainbow. Sure enough, one appeared. We grabbed Ava and ran across the street so she could see it…and she was so happy to see it.

Last year, we were talking about airplanes and how they can fly right through clouds. She said it was her dream to touch a cloud.

Well, a few months later we went on a road trip through the U.S. and drove along the Skyline Drive in the Blue Ridge Mountains. It was an overcast, drizzly day and at a few 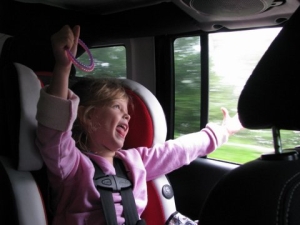 points we were high enough that we were driving through the clouds. We rolled down the windows and, well, look.

Just before the Academy Awards last month, she was asking about them and my wife and I were explaining. Ava said, “One day, I really want to make a movie.”

“Cool,” I told her. “Do you want to be an actress? Or the director, who tells all the actors what to do?”

“No,” she replied. “I want to make a movie…like the case the DVD comes in.” 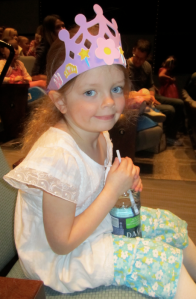 Two weeks ago, I took her to Montreal to see Frozen Disney on Ice. On the way, we crossed over  a small bridge and I pointed it out.

“But Dad,” she said, “I’ve always wanted to walk over a bridge.”

“We’ve walked over lots of bridges,” I reminded her. “On hikes, at the sugar bush…”

“No. It’s my dream to walk over a bridge with water under it.”

I guess it won’t be long before we can fulfill that one, either. There’s something to be said for dreaming small.

This entry was posted in Uncategorized and tagged Dreams, Fatherhood, Kids, Parenting. Bookmark the permalink.